End of the month sketches.

While I'm colouring this chap at home, I've been doing a few sketches on my work breaks. First up a little robot. I think he looks pretty derivative, though I like him. But I can't put my finger on what or who he looks like! Suggestions welcome, they'll win you a free tea from me at the shop. Maybe a biscuit too. 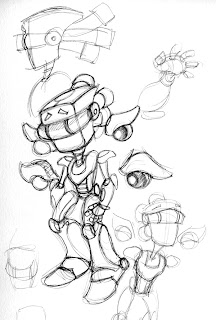 So I don't fall into a habit of drawing too many safe subjects I got some friends to throw out a few doodle suggestions over the weekend. I'll try and sketch at least one of these every day this week. Ian started off by telling me to draw some Daredevil characters. 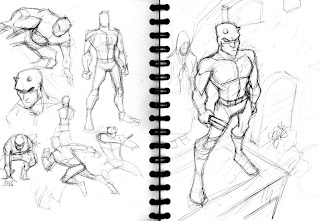 Sulky git! Well after that I cheered myself up by drawing Gumbo getting mauled by an army of small toy bears. 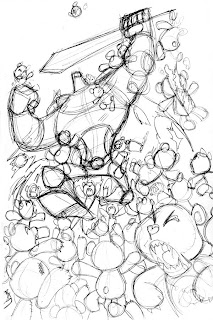 Lovely stuff! On who the robot looks like, there's a few similarities to Canti from FLCL (who is awesome).

Ah ah yep, bit of a telly head there.

That Daredevil is cracking!!! Keep up the good work!

Yeah! Eager to see more. Sketches are fun to look at.

As for the robot...I don't even know. I am not up on my cartoons lately.